This article about Russia  has something special, something different and something unique… It has been written with love by a friend and traveler who recently joined the group of Nonstoptravellers! Meet Sakis and his travel story:

This article began as a joke with Olga to whom I said she has no right to make a promotion in her previous article about a trip to Moscow because of her half russian origin!

Why don’t you write an article, then;> “was her answer.   I never back to a challenge, so… here i am!

Although “The term life journey” is one of the most common in terms when describing travel, it is not easy to think of something more precise for Russia. With an area far more bigger than the whole of Europe and history which has set the course of the world RussiA is an unforgettable experience for every traveller! 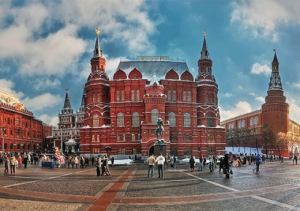 The legend named Moscow Third Rome, since the niece of Constantine Palaiologos married there after the fall of the city (the title of the Tsar is in fact the title of Caesar in Russian language and the eagle on the Russian flag is rooted in Byzantine double-headed eagle.). Arriving in Moscow what makes the first impression is the size. Everything is HUGE! The tails of cars, the volume of buildings and especially, the wealth of museums but also the palaces and the characteristic churches with the golden domes. Cadillac and Bugatti on Tberskagia Street, but also homeless outside of the Rolex Boutique a few straits below. The only thing that is certain is that the country is appropriate for social reflection.

The first shock… The Red Square

You’ll never forget the moment you walk through the gate of the Red Square. It’s true like getting into a fairy tale where the buildings are marshmallows. Facing three of the most beautiful buildings you’ll ever see in your life.

A warm coffee or a sweet in Gum, the largest department store located in the square is imposed as a walk afterwards as the center is extremely impressive.

Let’s face something in a low voice. Europeans with travel education often end up returning from museum to museum simply because they have nothing better to do or because we have badly planned our travel time. In Moscow this practice will simply lead you to wander around waiting for endless queues and controls (airport type) consuming an infinite time which they could devote to more interesting activities. So we present the most interesting and original museums that one can see.

The surprises in Moscow never end. The city is immense and the only thing that limits you to its beautiful is your time and budget since the city is one of the most expensive in the world. With a good division of the two, you’re overlapped.

It is really worth ride on the terrace of the Ritz for a coffee to see the breathtaking view of the Red Square. What will keep you there forever is the view of the seven “brothers”, the seven imposing buildings that Stalin built to symbolize the foundations on which a state must step.

My favorite! The Pushkin Café dates back to 1999 and is something you should not miss while you are in Moscow. Some people compare it to Cafe Greco in Rome.  Only it is much better!! The Russian cuisine is mixed with the French producing wonderful dishes (and sweets, try them!) but most importantly: Tsarist Russia revives before your eyes! Waiters with proepanastatikes Russian uniforms, pocket watches and some with the typical sideburns (!!) of the season put you 200 years behind.

If you’ve seen the Black Swan that gave Natalie Portman the ¨ Oscar now get ready to see it and live as you are in the birthplace of this art. The ballet was the entertainment of the Tsarist courtyard and there are many interesting stories among the dancers to gain the favor of the czars, but also to rise in the hierarchy, (for example the placement of broken glasses in the ballet of Prima Ballerina). Although you can enjoy the ballet and in St. Petersburg, the Bolshoi Theatre is located in Moscow. Book your tickets early as the prices can be extremely high and try to see it as a new experience as it looks nothing like anything you may have seen in Europe. (such as opera or Musical). I’m sure you’ll remember forever.

Those who love street food, and know that we are many, do not forget to try the street food you serve in the Red Square. There are several shops with their own tables where you can sit right after the museum tour. The street food is basically grilled meat (chicken and lamb) neat or in sandwiches and also some special burger. They are delicious and really worth a try.

Always remember that the world is like a book. And those you dont travel only read the same one page!

We wait for your experiences and (всегда путешествие)!

This was the experience of Sakis from his trip to Moscow, it was his own narrative and his own travel story! Thank you very much for the wonderful article, we very much appreciate your gift to our blog! If you liked the story of Sakis and would like to share some travel history with other travelers you can send it to us via our contact form and do not forget to do subscribe in our newsletter: 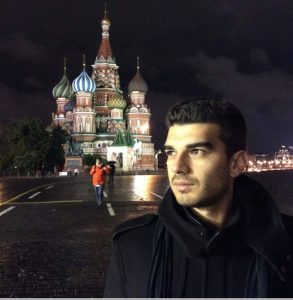 To whom they may concern… I am Sakis, the man who wrote this article for you. In case you wannna know my story, I come from a little town with big dreams, an amazing family, friends and a brother. I had the privilege to have an amazing mother who is the greatest traveler I’ve ever known, (only compared to Olga!). For whatever came later she is to blame…! Since I was 9 when I travelled for my first time to Czechs Republic I knew that I would travel till I die.  Several years later I have been to many countries and the more I travel the less i think they are.  My purpose is to give you information’s to manage your travelling time the best you can only from places I have been. Always Remember … The world is a book and those who do not travel only read the same page! e-mail: [email protected] ● Nationality: Hellenic ● Date of birth: 16/09/1996