Angkor Wat is the one of the most beautiful Cambodia temples as we have already written in our relevant post, but it is not the only one!!!There a lot of hidden temples and places, beyond Angkor Wat and around the jungle that are waiting to explore them and learn their secrets. This article is written to meet the most famous of them and it is a good start point to begin your Cambodia adventure like Tomb Raider.

The Bayon temple is well known for it’s decoration, which includes multitude of serene and smiling faces on the many towers that are in the top of the temple. It is also knows as “face temple”. Bayon temple was built in the late of 12th or early 13th century as the official state temple of Khmer king Jayavarman VII. 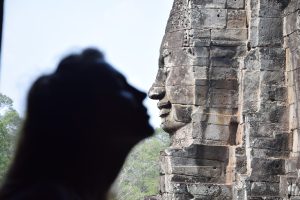 Ta Prohm temple or originally called Rajavihara (= monastery of the king), is one of the most outstanding and popular Cambodia temples. It is a combination of jungle trees and ruins and that is the reason why it is well known as Jungle temple. It was built in the late 12th and early 13th centuries, by the Khmer king Jayavarman VII, and was operated as monastery and university. The temple was abandoned in the 15th century (after the fall of Khmer empire) and the restoration started in the early 21st century. The temple of Ta Prohm was used as a location in the film Tomb Raider. 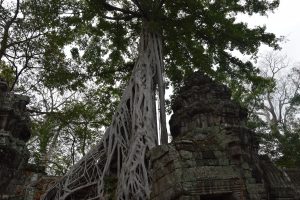 Banteay Srei or Banteay Srey is a Cambondia temple unique for it’s elaborate decorative wall carvings a reason why it also known as “precious gem” or “jewel of Kjmer art”. The buildings are constructed of red sandstone and they are miniature in scale, comparing with the Angkorian construction. Banteay Srei was consecrated on the end of 10th century (967 AD) and was the only major Ankor temple that not built by monarch. The temple was rediscovered in 1914 and has been ravaged by stealing and vandalism.

Phnom Bakheng is a Hindu and Buddhist Cambodia temple in the form of Temple Mountain, which is built in the top of a hill. It is popular for the sunset view of Angor Wat temple but it is also a unique temple, by architectural point of view. It is a symbolic representation of Mount Meru, home of the Hindu gods and it is built in a pyramid form of seven levels, representing the seven heavens. Phnom Bakheng is 65 metres high and the temple has 109 towers. It was built at the end of 9th century by king Yasovarman. This temple is also a Tomb Raider scene. There are two wayfairs to go to the Phnom Bakheng temple on foot or with an elephant ride.

Preah Khan is a Cambodia temple known for numerous trees and jungle surroundings that are growing among the ruins, like Ta Prohm. It was built in the 12th century for king Jayavarman VII to honor his father. The hole complex combined the role of city with almost 100.000 officials and servants. The first initial cleaning of the monument was conducted during 1927.

Pre Rup is a Hindu temple dedicated in the end of 10th century as the state temple of Rajendaravarman. It is a temple mountain made of laterite and sandstone.

Banteay Kdei is also known as “Citadel of Monks; cells” and its’ meaning is “a citadel of chambers”. It is another beautiful jungle temple like Preah Khan and Ta Prohm but smaller and less complex. It was built in the mid 12th to early 13th century during the kingdom of Jayavarman VII. Banteay Kdei temple was used as o Buddhist monastery and remained neglected after Khmer reign ended for several years. It was exposed in 1920 after cleaning the overgrowth vegetation.

Ta Keo is another temple mountain in Cambodia, which is possibly the first that was built entirely of sandstone. It was dedicated around 10th century, by Jayavarman V, but it remained unfinished until the reign of Suryavarman I.

Baksei Chamkrong is a small and not crowded Hindu temple, dedicated to Lord Shiva. It was completed in late of 10th century by Rajendravaman II. Because it is not popular to tourists it is very peaceful and in the top of the temple you could enjoy very nice view!

It is one of the five man gates of the ancient city of Angor Thom. It is the best preserved and most commonly visited form tourists. It was built in the late of 12th century by king Jayavarman VII. The gate was made to protect the city but it is also a holy Buddhist gate to the city. In the causeway you could find 54 figures of gods on the left side and 54 figures of demons on the right side. Although Angkor Thom is a Buddhist city, it is said that this scene depicts the Hindu mythology of the “Churning of the Ocean of Milk“. 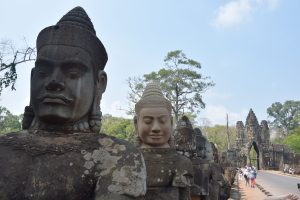 Terrace of the elephants or elephant garden is the place where the king Jayavarman VII used a platform to view his returning victorious army.

Here you could find the map of the tour!!!

Enjoy and do not forget

“travel is to live”

3 WAYS TO GET FROM EL VENIZELOS TO ATHENS