ANGKOR WAT IN CAMBODIA No1 IN TRIP ADVISOR

Angkor Wat is Cambodia’s most iconic temple, No1 in Trip Advisor’s Annual Travellers’ choice awards and the ultimate expression of the majestic Khmer culture!

A monument – wonder that impresses both because of its dimensions (take a look at the map!) and the incredible details in its architecture. Visiting Cambodia and Siem Reap, and the visit  to the World’s Heritage Temples, is a dream for every traveler, and not unfair! The Angkor temple complex, with Angkor Wat, the world’s largest religious monument and world’s No1 in Trip Advisor for 2018, is undoubtedly one of the most amazing monuments to see and visit! It used to be a sacred place of many religions of the world, including Buddhism and Hinduism, as it was dedicated to Vishnu. This temple is a symbol for Cambodia, since it appears on the flag of the country since 1863 as well as the country’s main tourist attractions.

It is the greatest sanctuary, of any religion, in the world.

A few words about Angkor Wat

Angkor Wat, the “great city”, was the ancient capital of Cambodia and was built by emperor Jayavarman VII on the ruins of an earlier city that was created by Udayadityavarman II and considered the home of the ancient gods. The Cambodian kings tried to improve the ancestors’ monuments in size, scale and symmetry, topping their efforts in Angkor Wat, the world’s largest religious building. The temple is the heart and soul of Cambodia and a source of wild national pride.

Unlike other Angkor monuments, it has never been abandoned and has been almost constantly in use since it was built. Angkor Wat is the top expression of the Khmer culture at the height of their empire and a perfect example of their architecture. The fortified town of Angkor Thom was the capital of the ancient Khmer state in the 12th century. 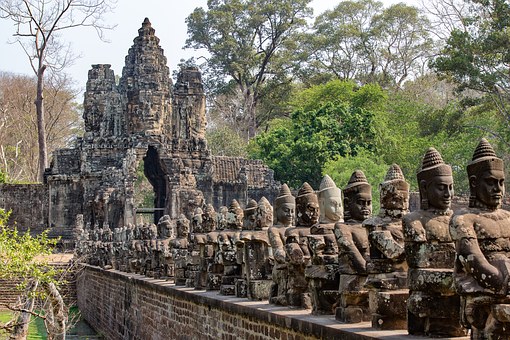 The visit to Angjkor Wat temple

Angkor Wat’s plan and the whole cluster are difficult to see when you walk through the monument because of their vastness. Its complexity and beauty attract and distract every traveler. From a distance Angkor Wat seems to be a giant mass of stone with a long road – a 200-meter trench leading to its center, but closely its surrounded by a series of towers,  chambers, terraces and yards at different levels associated with stairwells ! Angkor Wat is famous for having over 3000 charming apsaras (celestial nymphs) engraved on its walls. Each of them is unique!

The height of Angkor Wat from the ground to the top of the main tower is larger than  213 meters, The gallery with the columns defines the boundaries of the first and second levels. The third level supports five towers – four in the corners and one in the middle, and these are the most important architectural features of Angkor Wat. The stepped levels, one above the other, give the towers a conical shape. The total monument mimics a lotus bud, a symbol of purity !! Several architectural lines stand out on the profile of the monument. Angkor Wat’s smart design allows the view of all five towers from just some angles. They are not visible, for example, from the entrance. Many of the structures and courtyards are cross-shaped. This layout was used to link a part of the monument to another. Roofs were often laid to add height, length or dimension. A smaller copy of the central towers was repeated at the edge of two prominent areas. The great entrance road reappears on the other side of the monument! During the 20th century, there were works of conservation of this temple, which however were interrupted during the Cambodian civil war and the Khmer Rouge domination between 1970 and 1980. 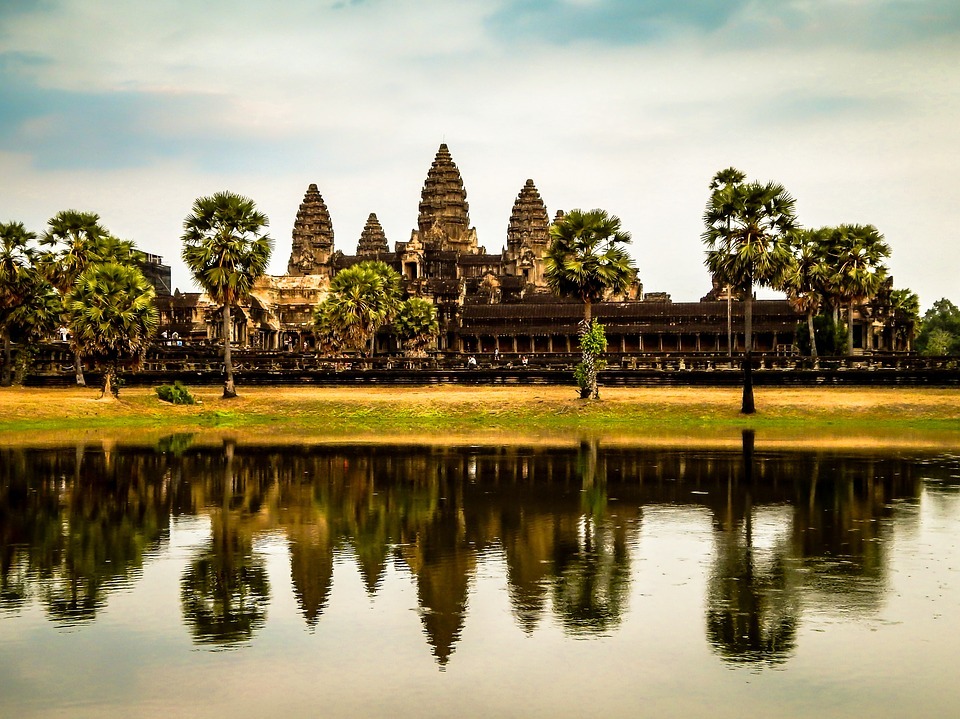 The general appearance of this miracle – temple leaves a sense of romance, beauty and strength! An impressive and grandiose monument, unforgettable, looks like something from outside our world has landed itself from the sky! Perhaps it is the most impressive sight in the world of monuments!

Continuing the tour you can visit other (many many other!) temples, each of which has a special architecture and charm. Starting from Angkor Thom’s South Gate, you will see the famous Bayon temple with 54 towers with faces, the elephant garden where Emperor Jayavarman addressed to his people and the famous Ta Prohm, where huge tree roots  literally embrace the temple! Maybe most of you already know him from the movie Tomb Raider with Angelina Jolie!