The city of Athens constitutes a puzzle of smaller areas that compose the magic that characterizes this city. Antiquity, tradition and history meets modern, contemporary and future. Pedestrian streets, people, shops, taverns, colors, flavors, images … there are not enough words to describe each of these neighborhoods mentioned below. But it is for sure that each of them has something unique that magnetizes travellers and locals, invites you to discover them, provides security, its in walking distance as well as associated with the transportation and of course worth visiting! Enjoy!

Definetely the most alluring district of Athens! The best neighborhood to start your visit in Athens city! Check out my older post about Plaka, the “Neighborhood of the Gods”. It is named like this due to its proximity to the Acropolis and its many archaeological sites.  The whole area is built on top of the residential areas of the ancient town of Athens.  Plaka is the old historical neighborhood of Athens clustered around the northern and eastern slopes of the Acropolis, incorporating labyrinthine streets and neoclassical architecture. The area of Plaka is one of the most attractive districts of Athens as there you can find amazing testaurants, cafes, music, friendly people and amazing small tourist shops to get your souvenirs. For the photolovers Plaka is an ideal inspirational place to take great and colourful photos!

Monastiraki is a famous district of Athens that extends from the Monastiraki square at the end of Athinas street until Thiseio. It is one of the best places to buy just about anything at the Flea Market at Monastiraki especially on Sunday when some of the stores close and people bring tables and carpets and sell all kinds of stuff from junk to antiques. You will find clothing boutiques, souvenir shops, and specialty stores. Also Monastiraki is a major tourist attraction in Athens which is named after Monastiraki Square, which in turn is named for the Church of Pantanassa that is located within the square. Thiseio is an area which has many cafés and cultural meeting pointsis surrounded by hills, heights and historical sites which are within a walking distance. The Ancient Agora, Stoa of Attalos, the Temple of Hephastus and Kerameikos Archaeological Museum can be entered from Thiseio while all others: the National Observatory, Acropolis, Philopappos Monument, Pnyx Hill which is considered the birthplace of Democracy and the Mount Lycabettus can be easily reached or viewed from Thiseio. The panoramic views of them and their natural surroundings from the Areopagus height are spectacular, especially by night. Try a romantic night walk under the athenian sky!

It is the historic center and the backbone of ancient Athens, where today takes place all political, economic and social life of the country. The historic center follows the modern trend of returning to the center which resulted in the transformation of the city center into a metropolitan district. The area is full of hotels, airbnbs, it hosts the largest part of entertainment and fun of the city. Accessibility is easy since there are three metro stops, one train stop, its the starting point of all three routes of trams, bus lines 130, 12 trolleybus lines. From Ermou street with the varius department stores to the Panathenaic Stadium, University and Monastiraki district, historic center is one of the most complete and commercial areas of the city. What about culture? 7 cinemas, 10 theaters and many artistic cafes which host cultural events. Uncountable bars, cafés, food places and clubs. Famous city pins are the Constitution Square, Kapnikarea church (square) , Karytsi Square, Metropolitan Cathedral of Athens, Ermou Street. Dont forget to vitis Square Saint Irene the latest “talk of the town” and definetely check in at National Garden, Zappeion Hall, and Acropolis hill. 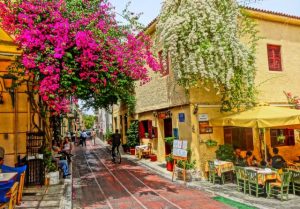 The district of Kerameikos consists of Gkazi, Metaxourgeio and Votanikos, and its a big area in the center of Athens that remains authentic, artistic and genuine. A charmingly poorly lit area, with narrow pedestrian streets, full of shops waiting for you to discover them. These areas have something real, something that reminds us of old neighborhoods while encounter modern industrial style perfectly and coexist harmoniously, giving life in this ‘degraded’ neighborhood. This renovated former industrial area hosts art galleries, museums, many cultural events throughout the year, cafes, bars, clubs and shops with Greek folk music. A trademark of the region post-industrial design associations.

The district Koukakis (or just Koukaki) located on the southeastern side of the Filopappos Hill in Athens. It borders the regions of Petralona, Neos Kosmos (photos taken from Neos Kosmos – Dafni hill) and Acropolis. Imposing neoclassical next to sweetest houses. Alternative bars next to gourmet restaurants. Levantine taverns next to authentic Greek Myers. Groups with bicycles. Older couples catching table in the pedestrian zone and watch the world goes by. Tourists come from Dionysius Areopagite pedestrian street, neoclassical mansions beside the last remaining houses.  Koukaki  has two main pedestrian streets with plenty of cafes, bars, restaurants, grills etc. to serve residents and tourists from hotels around the Acropolis. In a walking distance to Koukaki you can visit Dourgouti area in Neos Kosmos district, which i trully love and suggest, but i will write about it in a special post dedicated to Dourgouti. Stay tuned!

Petralona is a district of Athens located north of Tauros and Kallithea city, in the east bordering Koukaki, Thiseio northeast and northwest with Gkazi. Petralona have accomplished to become the most hot spot for noon and night out of youth, but still keep the very special and beautiful nature of neighborhood. You can walk the neighborhoods of Upper and Lower Petralona and discover numerous shops to eat and drink … low budgetly. Walk the Troon street, especially on summer days, you will be thrilled by the locals, the tastes, the smells and the music! 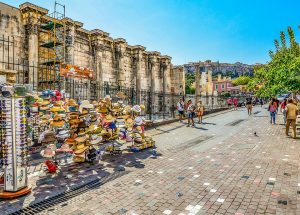 One of the largest districts of old classic Athens and perhaps one of the last in the City of Athens boundaries that maintain the characteristics of a a real neighborhood. It is within walking distance from the city center, but also has its own autonomy in the market and fun. Its near the city center, full of good apartments, close to the National Research Foundation, the Panathenaic Stadiumand the Rizari street.

An area with a lively night and artistic life, the neighborhood of Psiri now has some of the most famous clubs, and dozens of small bars that play almost every music, from electronic to latin. The area has captured the Athenian audience, achieving a balance of art, beauty and fun. By the morning run and the many small low budget tavernas of Psiri, serving wine, ouzo and raki with honey and gather mainly young groups.

Neither anarchic nor classy. Perhaps the most genuine urban part of town. Architecture with identitya and high culture successfully combines the family with the youthful and student style. One of the oldest districts of Athens, hosts the beautiful neoclassical buildings, the majority of student world, and is also a meeting place of artists. In Exarchia you can find a large number of clubs and bars with rock music. Most of them are around Exarchia Square and at the foot of the Hill of Strefi. Nearby are the most classic and old bookstores of Athens and there are even three cinemas and two theaters.

Kolonaki was one of the main Athenian nightlife options for decades  with the most signature restaurants and cafés in town and still remains a meeting place of people of interest from politics, journalism and business. This does not mean that the kolonaki is limited only to these options. In the area there are plenty of impressive clubs with dance music typically align their musical choices with London and New York. Kolonaki is a classic choice for all ages. The most famous bar and clubs are concentrated in the streets Haritos, Lucian, Plutarch, Skoufas and around Kolonaki Square.

The refugee neighbor of New Smyrna begins to grow in 1922. From 1970 onwards the Athenians smell that is a suburb near the center which is environmentally cleaner. This resulted in the doubling of the population and the building of more open spaces. Despite the doubling of the municipality, Nea Smyrni is a region with great standards (layout, green, transport). Still, its trademark, the square remains a magnet and attracts a large proportion of young people of the southern suburbs and other central areas such as Kallithea, Koukaki and the Neos Kosmos. The main hot spot of Nea Smyrni is its Park where people of all ages do gymnastics all day long!

The Ambelokipi remain a classic urban Athenian neighborhood. The best and more youthful piece there is from Mavili square to Panormou street. Served by two metro stops and dozens of bus lines and trolleys. The many movies and theaters is the main plus of Amelokipoi. Square Mavili hosts some of the oldest bars of Athens and of course the famous Canteen of Mavili which since 1989 serves clubbers, doctors (there aree many hospitals in the area), passengers etc..for all night long. Perfect place for the first date!

ANGKOR WAT IN CAMBODIA No1 IN TRIP ADVISOR

GARDENS BY THE BAY IN SINGAPORE