A unique experience for us was the game drive Safari in Tanzania’s national parks by Mwewe expeditions. In our travel mind the region of Africa that extends from the Sahara desert to the south of this amazing continent is always connected to unlimited safari game drives!  Sub-Saharan Africa still remains fortunately for all mankind one of the purest natural landscapes with unique natural flora and fauna. Vast areas with plants grasslands and wetlands are home to hundreds of animal species! Read more about Tanzania here! 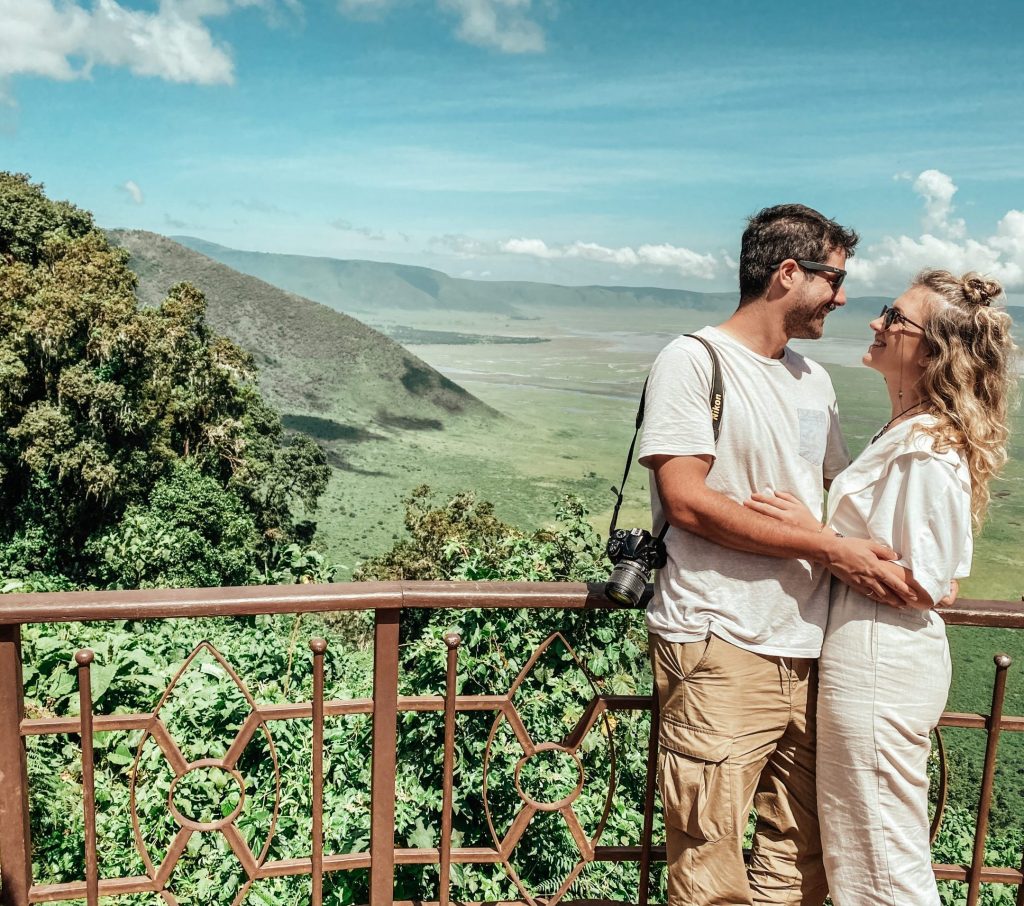 From Kenya to South Africa animal herds migrate from region to region depending on the time of year and the call of the nature in search of food, survival, mating and hunting! All this huge migration is a unique setting for every traveler and it is definitely worth experiencing at least once in your life!

From our personal experience of the safari game drive in four tanzanian national parks, we recommend to each one of you to try it! What we loved the most was the respectful way of the tour towards nature and animals! The truth is that we had no idea what to expect and while there was hesitation before going there, fortunately the experience is only positively valued and we share it with you below! 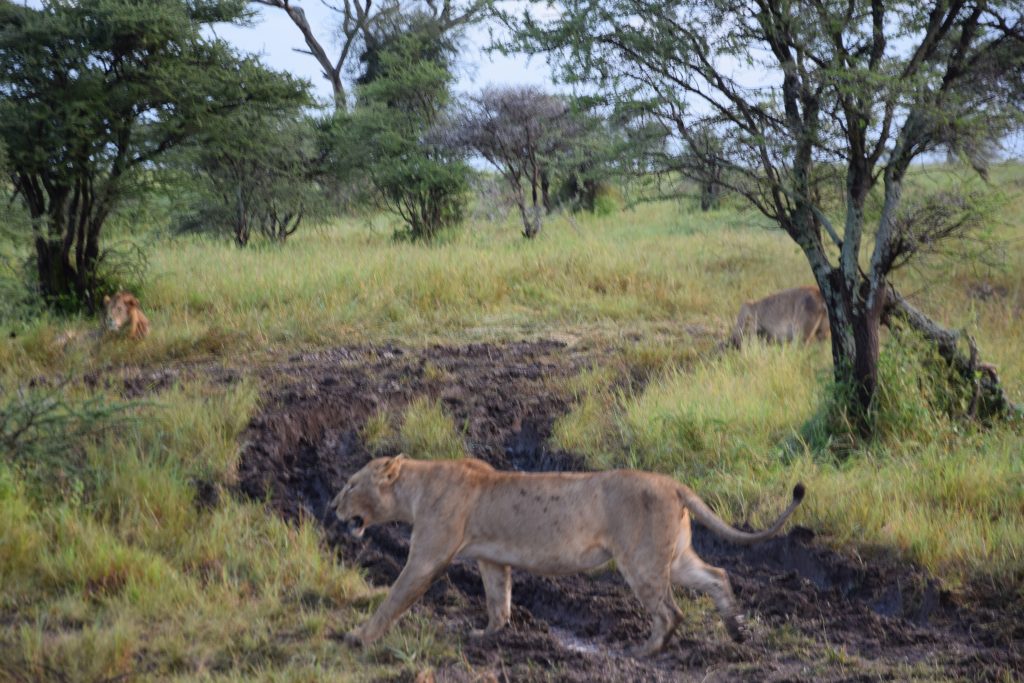 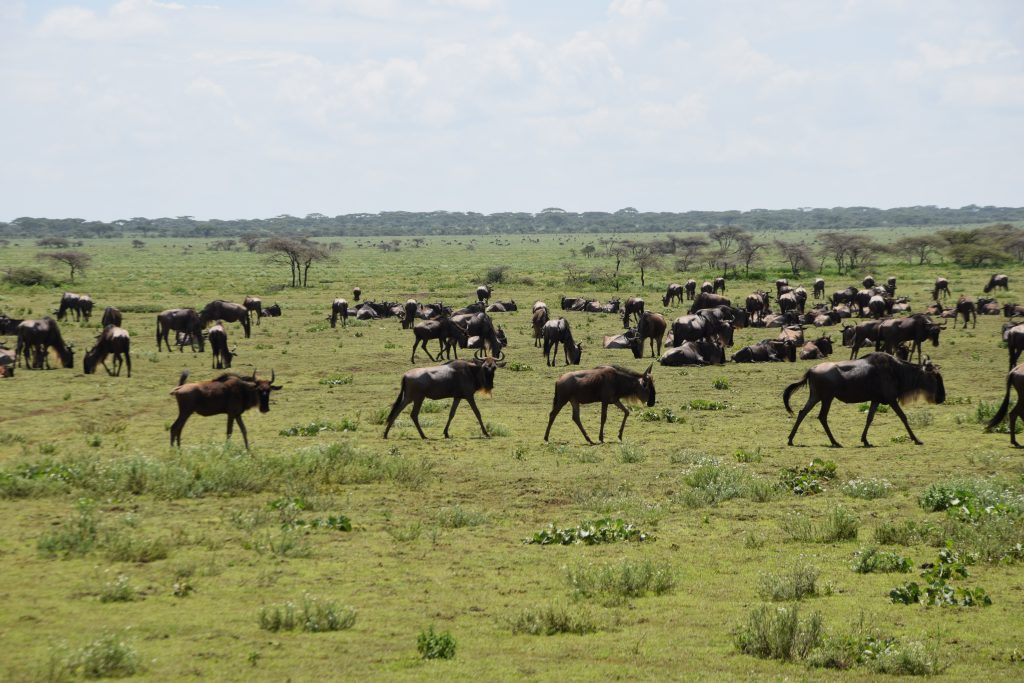 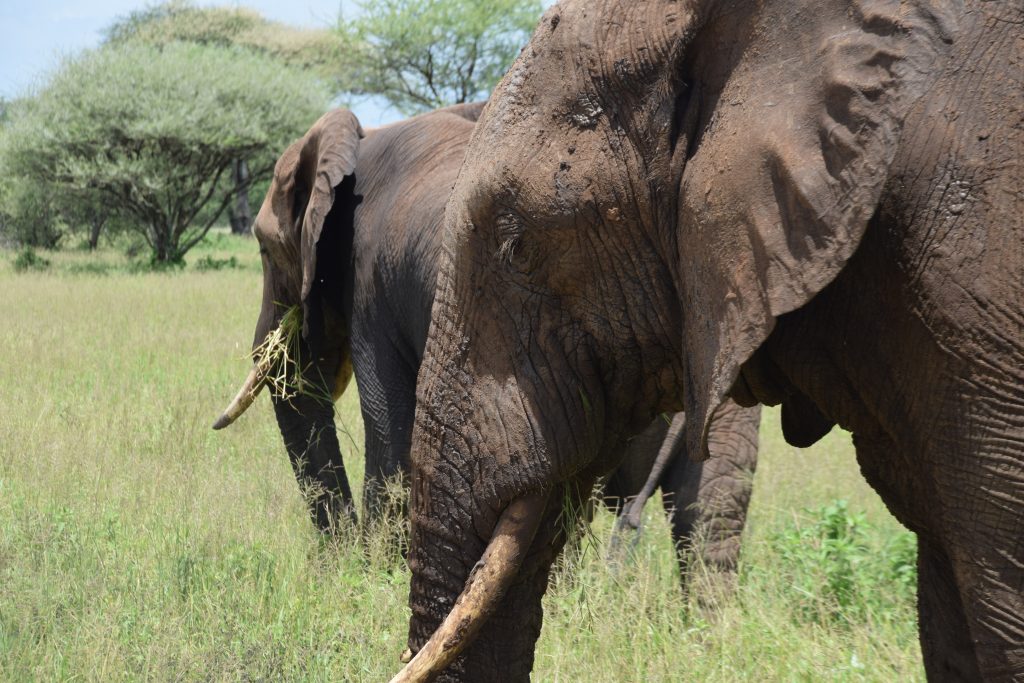 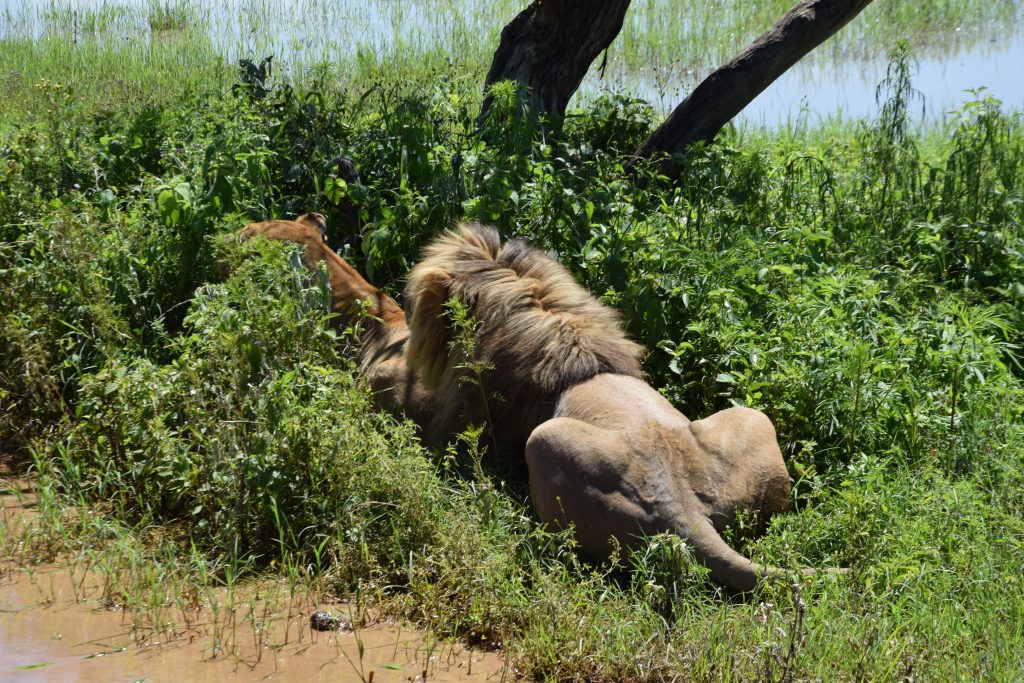 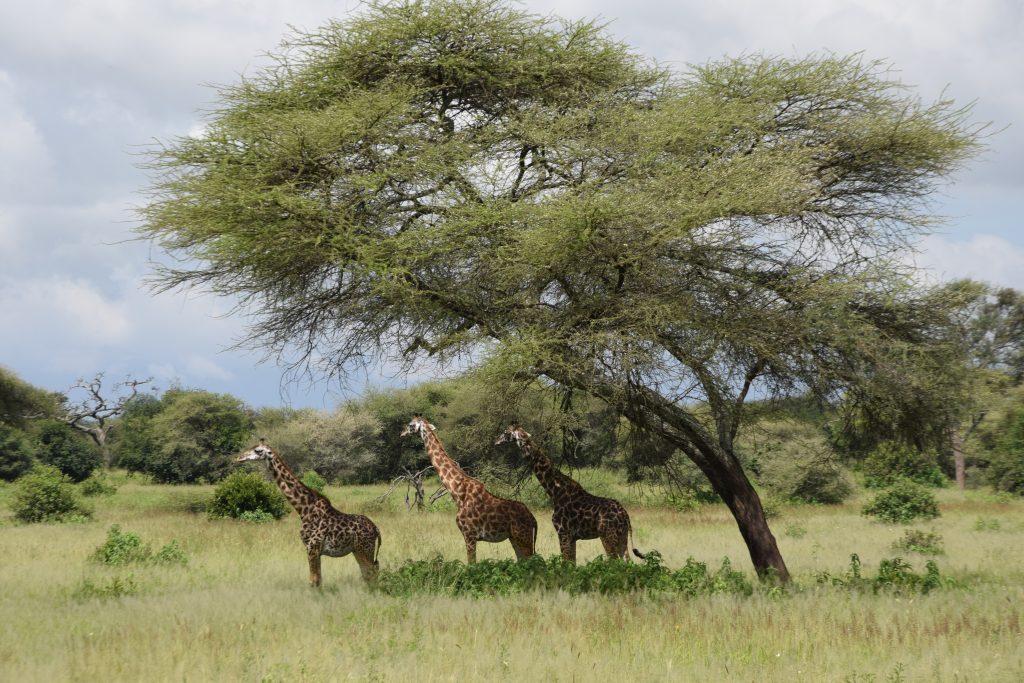 The safari tour operator we chose is Mwewe Expeditions and the main reason is the excellent comments we had read online about the company and about the owner of Mwewe called Sariko. The initial impression was completely confirmed as professionalism was not lacking not for a minute, there was a very youthful lay out that made our safari game drive more adventurous and the whole 5 day itinerary was perfectly organized always according to the itinerary we had discussed!

Mwewe Expeditions is a locally family owned Company that operates professionally with an experienced team for over 13 years in tourism Industry in Tanzania. Whether you are honeymooners, family, solo or groups we can make your dreams turn into reality.

Their moto is “We guarantee the best experience ever, nature guaranteed” 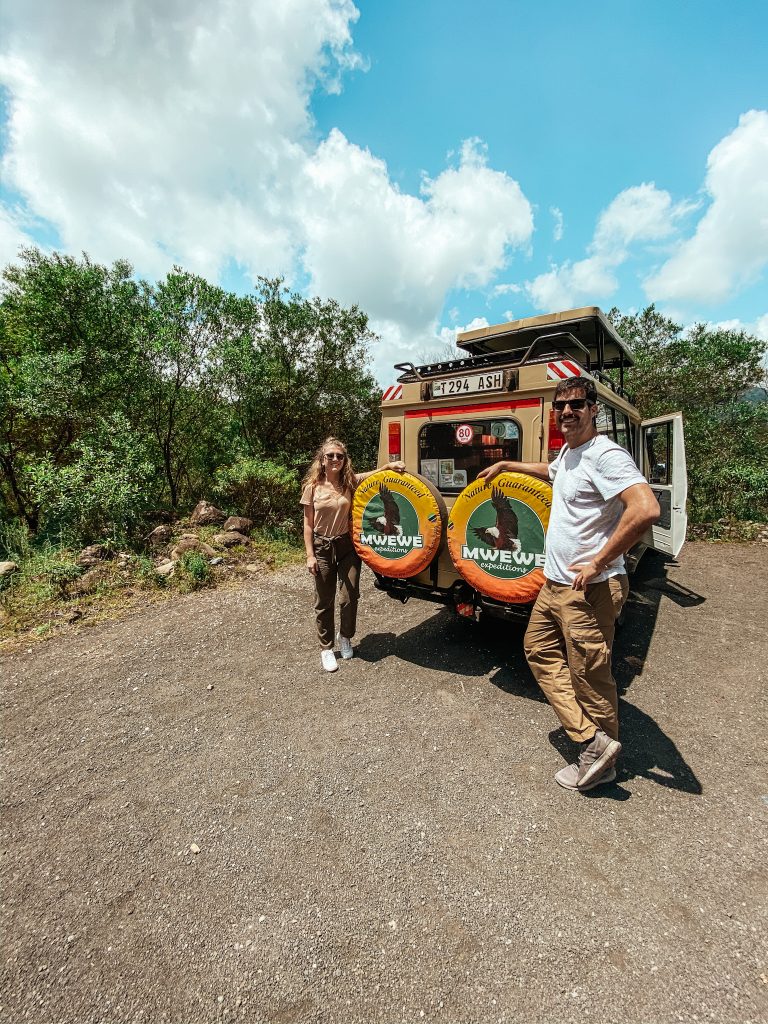 To contact Sariko and set up your own itinerary you can contact via company’s site, Facebook or Instagram! Although he is always busy traveling on a safari game drive at north Tanzanian national parks, he responds rapidly.

Before we move on to the national parks we visited (you can of course choose more, less or different than those we chose depending on the time of year you are travelling ), the time we chose is the era of predators as we wanted to see a little action thing. Don’t forget, of course, that it is the natural environment of animals and not a show for the humans, so there is no guarantee of how much action you will see, how many animals or what time you will see them! This is, of course, the point of having a safari game drive, the game drive in the national park lasts all day and puts you in the process of constant vigilance in case you see any of the rare big five animals in action while seeing dozens and hundreds other animals migrate, guard their little ones, etc. 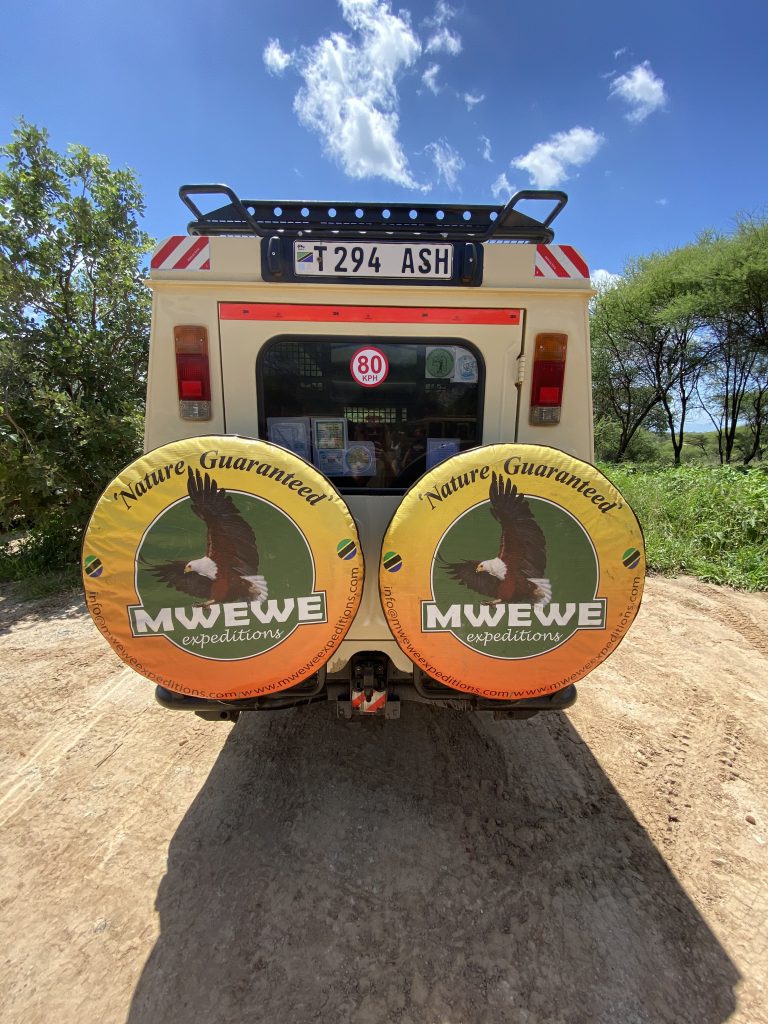 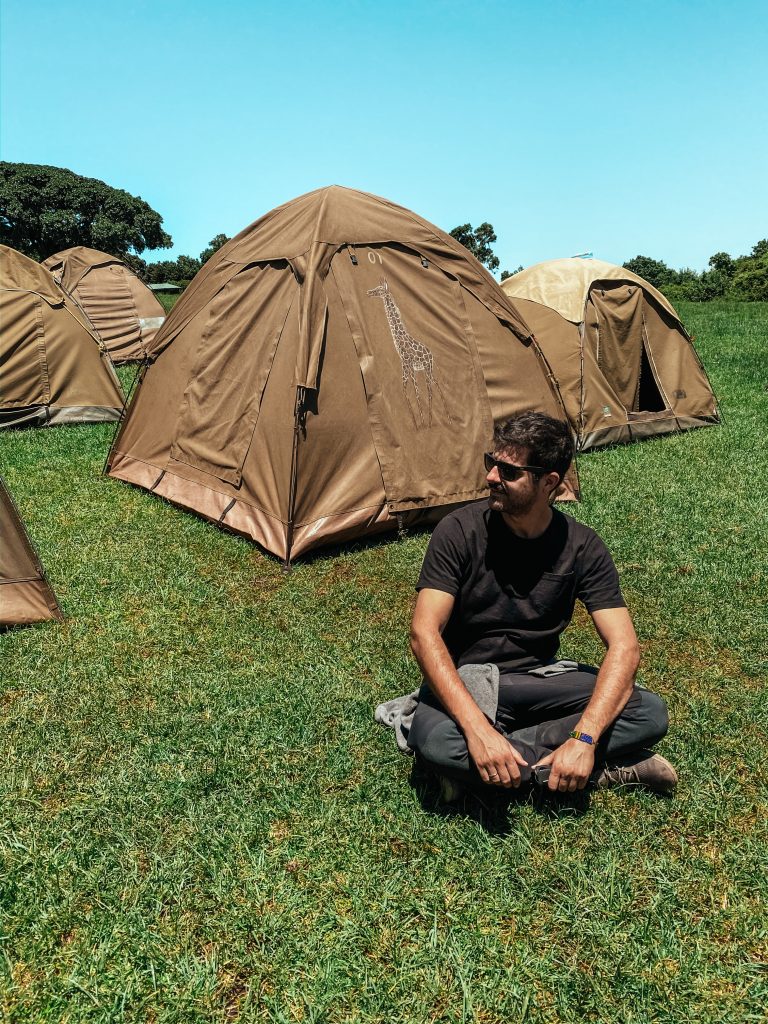 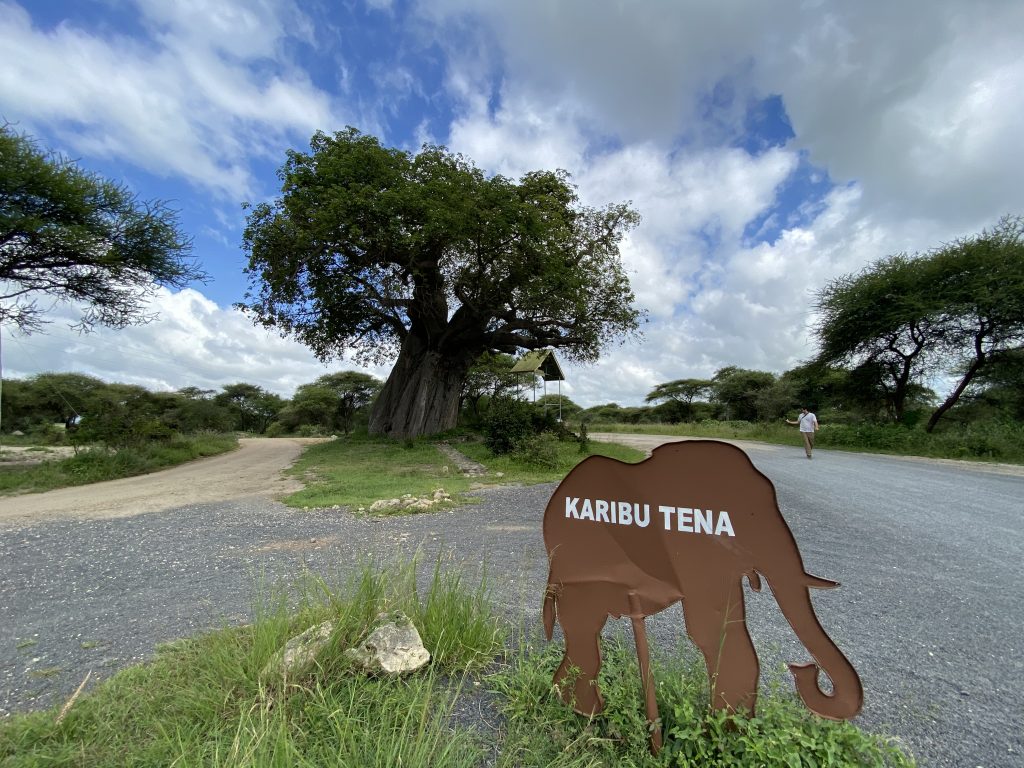 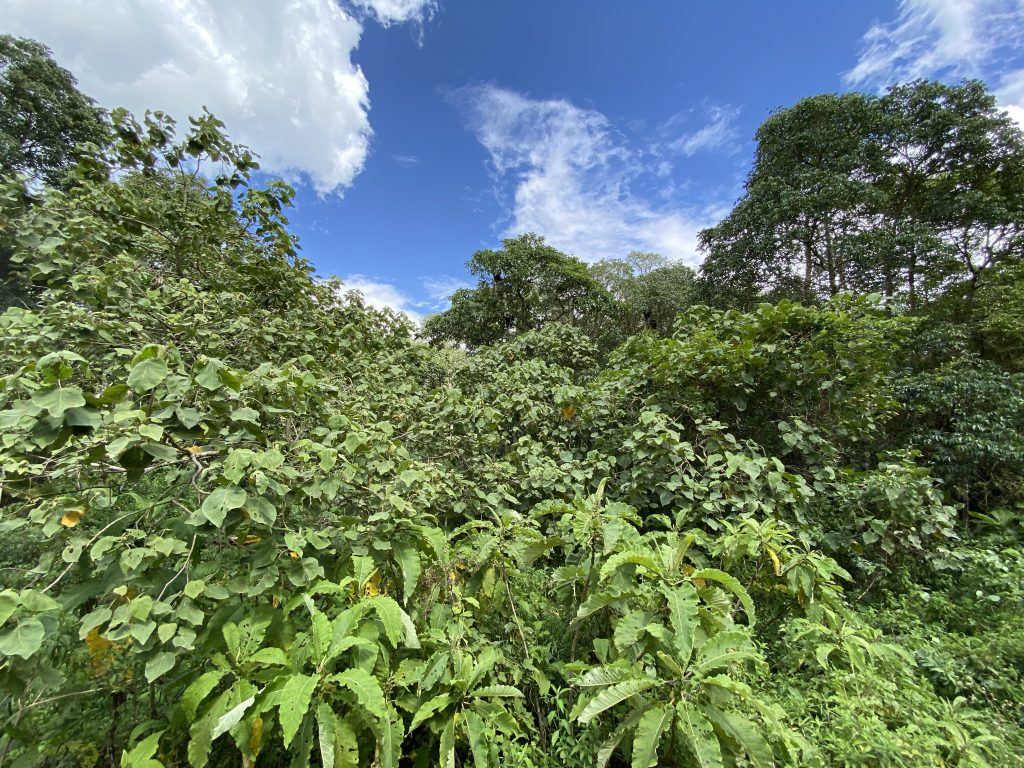 The Serengeti National Park is a Tanzanian national park in the Serengeti ecosystem in the Mara and Simiyu regions. It is famous for its annual migration of over 1.5 million white-bearded (or brindled) wildebeest and 250,000 zebra and for its numerous Nile crocodile and honey badger

A vast intensity of greenery! Greener than we’ve ever seen before! This park has as much land as a small country and hosts millions of animals every year. In addition to elephant, zebra, gnous, sourcata, giraffe, hippopotamus, buffaloes, all kinds of antelope and lions you will meet (if you are lucky) cheetahs, pumas and many more species! An unforgettable image for us is that of the cheetahs sitting aristocraticly on tall trees carefree and relaxed by all danger!

Don’t worry about the food at the campsite where you re gonna overnight, as Sariko will make sure you have the best cook with you and you will all eat together at the restaurant areas with the rest of the campers or co travelers if you share the safari tour!

The 2009 Ngorogoro Wildlife Conservation Act placed new restrictions on human settlement and subsistence farming in the Crater, displacing Maasai pastoralists, most of whom had been relocated to Ngorongoro from their ancestral lands to the north when the British colonial government established Serengeti National Park in 1959.

Personally this was our favorite national park, because of the countless of animals we encountered and the unparalleled beauty! You are in the largest crater in the world in an indescribable setting that you have certainly never encountered before and you are in awe of nature unfolding before your eyes! Mothers, newborns, herds, predators all together in the same landscape!

The main feature of the Ngorongoro Conservation Authority is the Ngorongoro Crater, the world’s largest inactive, intact and unfilled volcanic caldera. The crater, which formed when a large volcano exploded and collapsed on itself two to three million years ago, is 610 metres (2,000 feet) deep and its floor covers 260 square kilometres (100 square miles).

If you stay at the campsite be sure you have isothermal clothes (see our list here) to withstand the cold and enjoy the stars in the evening up in the crystal clear night sky!

Extra hint: when you find yourself there, ask to find out where the name of the national park came from! The answer will surprise you! 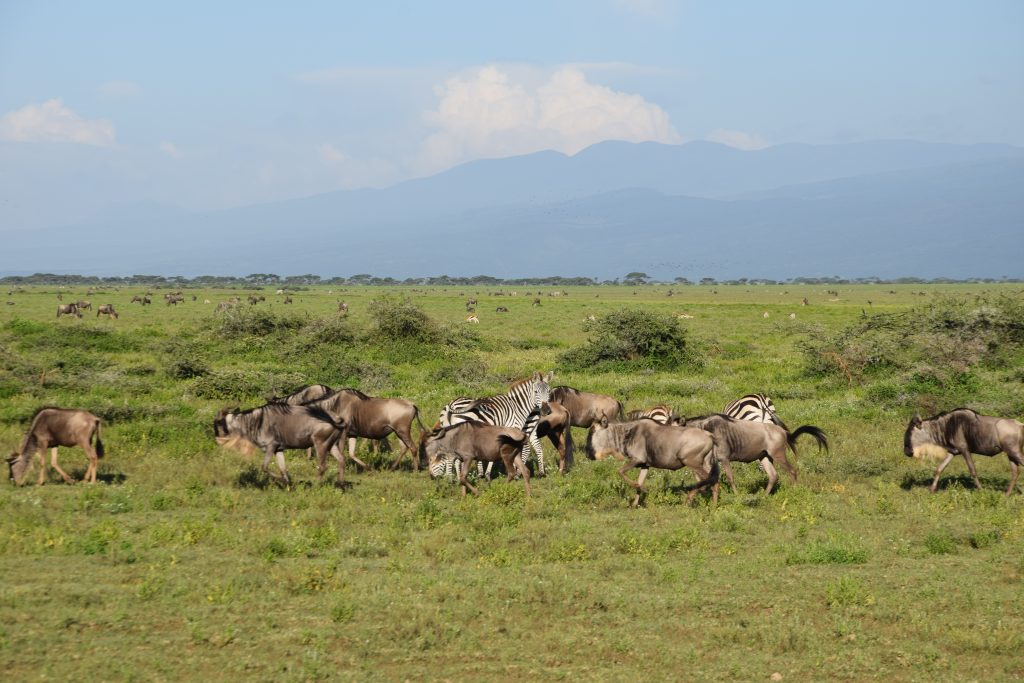 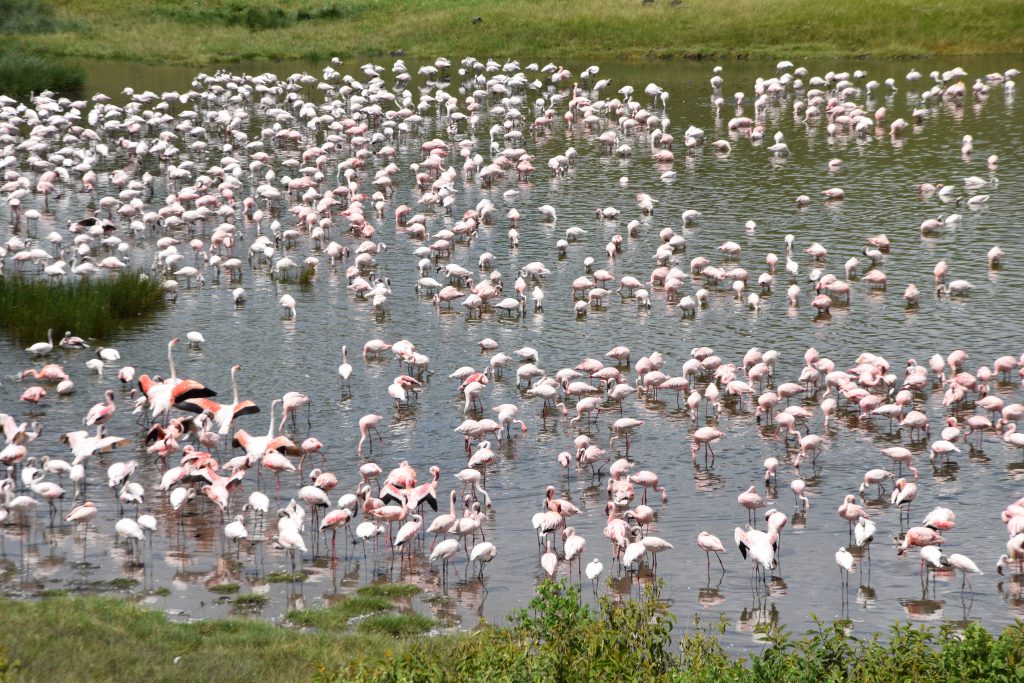 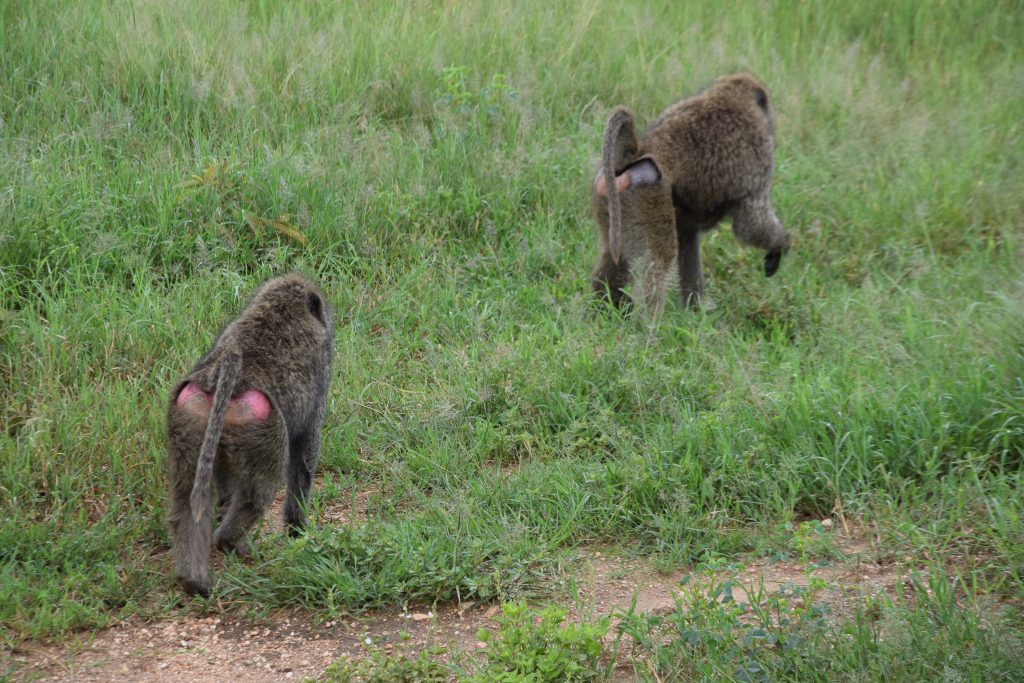 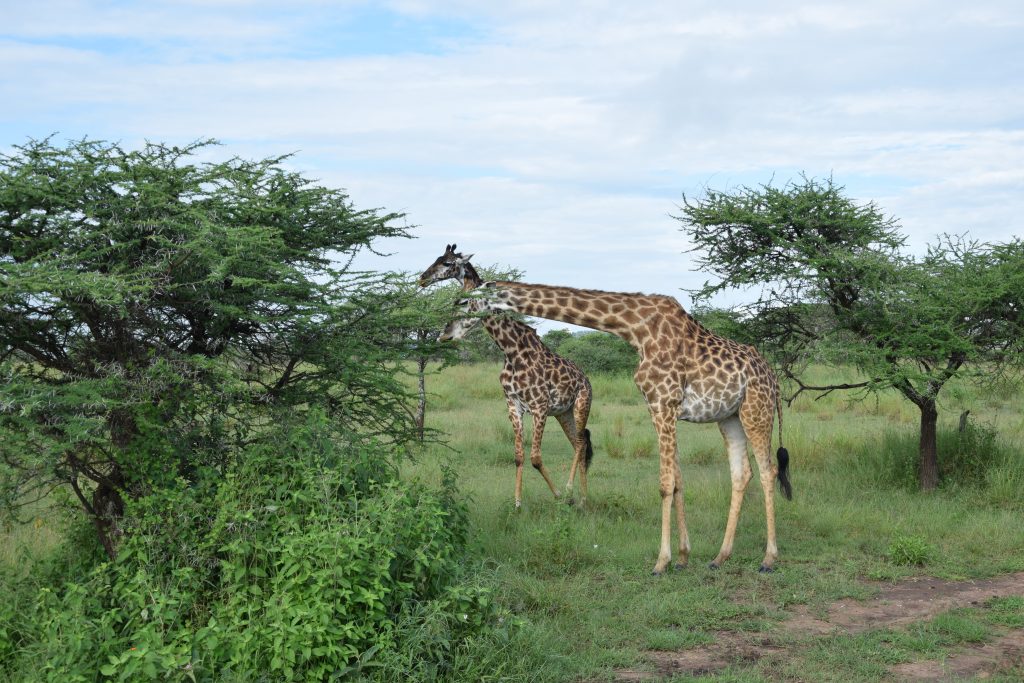 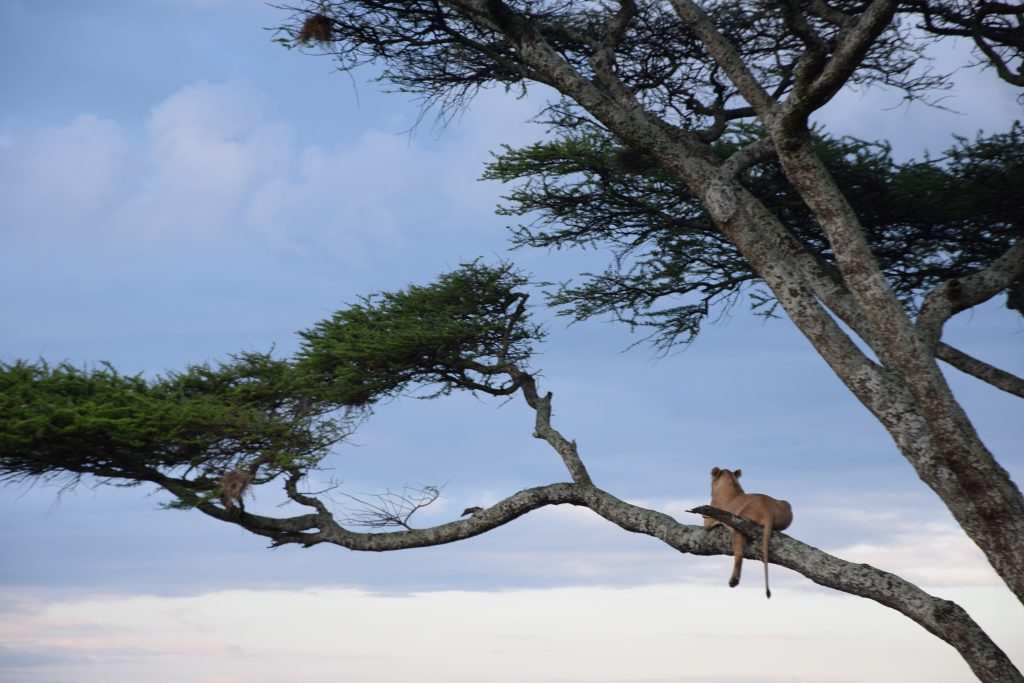 This park includes all the animals mentioned above but the scenery and the route is very different and in addition here you will find the trees with the huge trunks calles Bao bab trees!

We ll never forget seeing an elephant into a hollow trunk of bao bab tree!

Arusha National Park covers Mount Meru, a prominent volcano with an elevation of 4566 m, in the Arusha Region of north eastern Tanzania. The park is small but varied with spectacular landscapes in three distinct areas. In the west, the Meru Crater funnels the Jekukumia River; the peak of Mount Meru lies on its rim. Ngurdoto Crater in the south-east is grassland. The shallow alkaline Momella Lakes in the north-east have varying algal colours and are known for their wading birds. 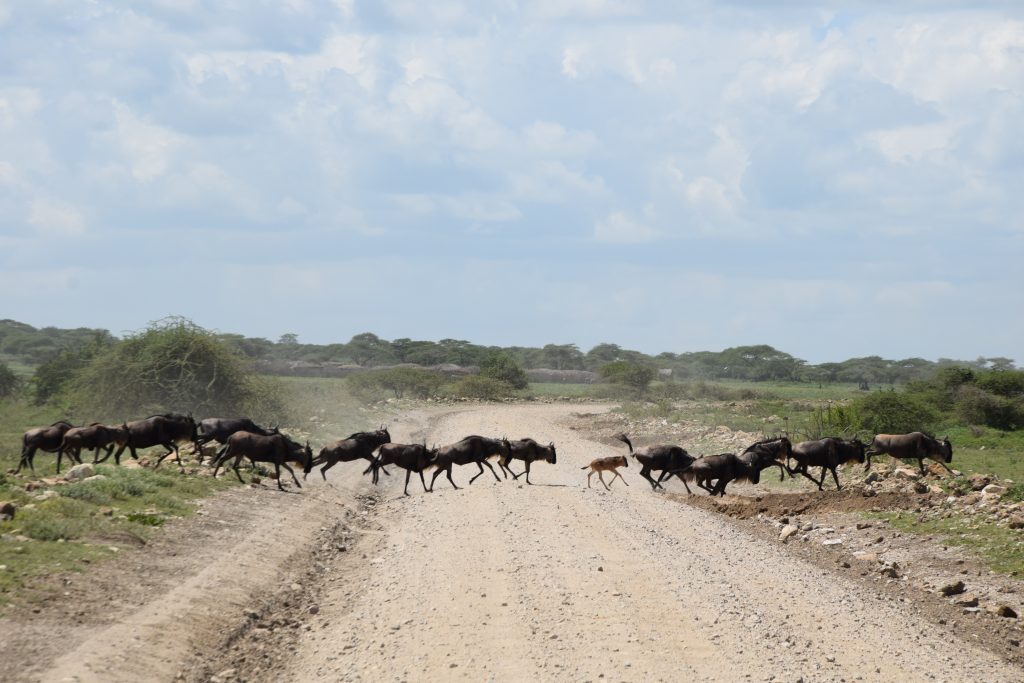 The scenery complements a park with several unique pictures as here you will live more of the tropical part of Tanzania! You’ll be touring into the jungle, meeting monkeys, baboons, thousands of flamingos and the unique Columbus monkeys with the lovely and impressive hair (interesting fact the greek origin of the word Columbus – learn more at the museum you ll meet during the safari).

Where to stay at the National Parks in Tanzania

For lodging inside the national parks there are two options. The first choice is to stay in a lodge, but keep in mind that due to the small number of lodges the price start from 150€ per person per night and not unfairly we would say comparing to the unique view of course and in general to the national park itself! The second choice is the one we chose and it is not other that our beloved camping under the stars! Campsites is the most common choice amongst travelers not only because of the price but mainly for the general experience it offers! The campsites are located inside the area of the national parks as well as the lodges, they are right next to the original villages of Maasai tribes and you will hear at night all nature sound including animals’ roaring or eating.  Unique unforgettable feeling!

If you decide to go on a safari tour in Tanzania and explore the extraordinary national parks in Tanzania you just go ahead and choose the best tour operator in the region, choose Mwewe Expeditions. Safari in Tanzania is an experience worth getting directly into your travel bucket list! You ll get the chance to connect with nature something that will fascinate you more than anything,  to witness the greatness of nature and admire closely the natural evolution, hunting and the coexistence of thousands of animals!