With sunshine around 300 days per year, Kalamata, the capital city of Messinia, is an exciting all seasons city break. A place where thousands of years of history, philosophy, culture, science, arts and politics blend beautifully with the modern, cosmopolitan and vivid life. Kalamata is the second-largest city in the Peloponnese and chief port of the Messinia regional unit, which lies along the Nedontas river.

Built on the site of ancient Pharai, the city took its modern name from a miracle-working icon of the Virgin Mary known as kala matia (good eyes).  It was discovered in the stables of an Ottoman aga (governor), who became a Christian as a miracle. The icon now resides inside the city’s oversized cathedral, the Church of Ypapanti.

Below the city’s castle, the small but attractive old town is located, a favorite meeting place for young people, because here is concentrated the nightlife (in winter). Old town was almost totally destroyed by the Turks during the War of Independence, rebuilt by French engineers in the 1830s, then levelled again by an earthquake in 1986. A lively Saturday food market at the old town is waiting for the visitors to try traditional products such us Kalamata olives, pasteli, olive oil etc.

Walk to find its castle and places of interests such us the hall that hosts every summer the prestigious International Dance Festival. The castle with the panoramic view is built on the site of the acropolis of Faron. Constructed in the 13th century by William Villehardouin and underwent subsequent additions and alterations by the Venetians and Turks. At the foot of the castle lies the  church of Ag. Ioannis which dates back to the post-Byzantine times. Visit the cathedral of the Visitation-Ypapanti (1873), the monastery of nuns (12th c.), the Byzantine church of the Agioi Apostoloi (13th c.), which received special historical value as here was celebrated the first thanksgiving in liberated Kalamata on March 23, 1821.

Fertile plains and mountains, beaches and coves, proud villages, colourful yards and Byzantine churches harmoniously matched to a place that perfectly meets the expectation for an unforgettable vacation. The shadow of Taygetos mountain, the endless olive groves touching the shore and an endless beach with beautiful paint colors is the charismatic state of this city. After liberated from the Turks, thanks to the products of the fertile Messinian land (olive oil, raisins, figs, etc.), Kalamata became a rich urban center and important port.

The old Town Hall, the Gallery of Contemporary Greek Art, with paintings, sculptures and engravings, the Archaelogical Museum with finds dating from the Bronze Age to the Roman period, the Folklore and Historical Museum with traditional items, local costumes and relics from Greek Revolution of 1821, the municipal theater and Railway Park where exposed old engines and railroad cars, the meeting of residents and visitors walking point is the spacious central King George Square. From here starts the pedestrian part of the main road Aristomenous where you can find many shops and cafés. The district developed around the picturesque railway station with pedestrian network, small coffee bars and taverns. One of the gifts of Kalamata, is the huge beach (4km), clean waters (blue flag). The beach stretches along the boulevard Navarinou and is one of the most beautiful places in the city to walk or ride a bike. On the western beach there is a remarkable marina town with many tourist facilities, cafes and restaurants.

Ancient Messene (Messinia), Mani, Vergas Beach, Little Mantineia, the Avia,  town of Messina, the mountain villages of the western slope of Mount Taygetos, on the way to the city of Sparta (the route to Sparta is one of the most beautiful in Greece), Oreini Arcadia, Voidokoilia, Agios Andreas, Gargaliani (Marathopoli), Kardamili (New Suburb), Koroni, Methoni, Kyparissia, Petalidi, Pylos (Gialova), Stoupa and Finikounda. which in recent years have developed into resorts with significant tourist infrastructure and nightlife during the summer months,

Find out the 7 Best Things to do in Kalamata city. Other than this you can choose amongst:

Accessibility: two hours and a half away from Athens. 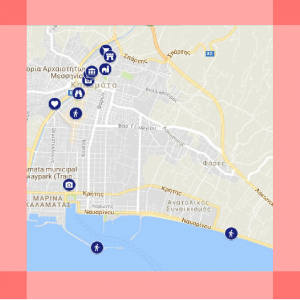 Things to do in Kalamata – nonstoptravellers

HOW TO TRAVEL TO GREECE BY PLANE ON LOW COST