Only those who have already visited Halkidiki know! For those who still…have not visited this place, we are here to get to know it better! From the secrets of Kassandra to the nature of Sithonia…. 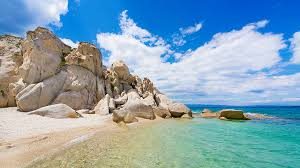 At the east side of Sithonia there are Vourvourou, Diaporos, Kavourotripes only some from the most beautiful places in Halkidiki. Beautiful beaches, blue waters, countless organized and quite luxurious cmpsites, shady plane trees, pines, caravans and beaches! This is the east side of the second leg of Halkidiki  and we’re going to see and western now… There we will find super fresh fish in Porto Koufo and we ll take the chance to climb the Parthenon a beautiful and picturesque mountainous village at the mountain Itamos!

Cassandra and “her” secrets

We now are going to pass to the first leg of our beloved Halkidiki, an area a little more touristic and full of summer bars and clubs with people and all the students of Thessaloniki and not only! Surely the image of overcrowding beaches and tavernas its not something we love to see when we wander around, but such beautiful places are impossible not to attract more and more tourists each year! We will choose to mention the Afitos, the lagoon of Glarokavos and the… Magical Akrotiri Possidi with the characteristic lighthouse (for those who know the magical sunrise at Akrotiri is not comparable to any exotic place!)!  Also look for the Nea Fokea Tower and the Sani Tower.

Other places of interest in Halkidiki

In our opinion the best way to enjoy all the places we suggested even if its for a little time, is with a great one week road trip at least! Halkidiki is like a cluster of many small islands each of which is special and we love it for a different reason!

Indulge in the hospitality of northern Greece and put Halkidiki in your next plans and bucketlists!